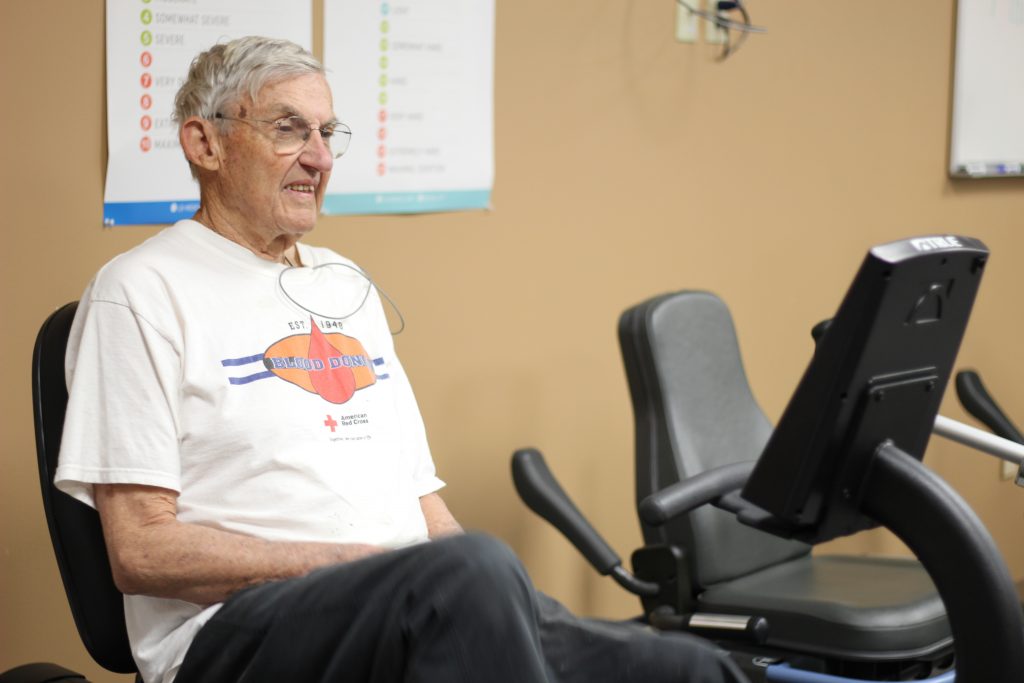 Willis Heck was relaxing the day after Christmas 2017, sitting in his chair reading before dinner, when he began having difficulty concentrating and even turning the pages of his book. He also noticed his chest and arms were sore.  Although he was able to eat when his wife, Jan, called him for dinner, the discomfort and pain continued. He then began having trouble breathing.

“When I got up, it wasn’t any better,” recalls the retired Newton schools superintendent and long-time member of the Newton Medical Center (NMC) board of trustees. “So, we drove to the emergency room.”

Once there, physicians quickly discovered Heck had suffered a heart attack, with one of the arteries to his heart blocked. After surgery to place a stent to open the blocked artery, Heck was soon on the road to recovery. One of his initial steps along that road was a visit to Jennifer Scott Koontz, MD, medical director of NMC’s cardiac rehabilitation program.

“Dr. Koontz explained to me that rehab was going to be important on the road to being healthy,” Heck says. “I knew I would be exercising and having my heart rate and blood pressure monitored and that I would receive educational information about things like healthy eating and (heart) risk factors. So I knew it was good to do in the long run.”

According to the American Heart Association, participation in cardiac rehab after an event such as a heart attack is one of the best things a patient can do for his or her heart health. It can lower the risk of future cardiac events, promote healthier eating and weight loss, facilitate a return to work and enable someone to better engage in daily activities.

NMC’s physician-supervised cardiac rehab program, staffed by licensed therapists, nutritionists and other heart care professionals, is designed to limit the physical and psychological effects of cardiac illness, control certain cardiac symptoms, and encourage healthy habits such as eating well and exercise to reduce the risk of future heart issues.

“There has been tremendous research that demonstrates participation in a cardiac rehab program reduces future risk of heart attack and improves quality of life,” says Dr. Koontz. “Our program has proven effectiveness in improving heart health with monitored exercise and works on lowering high blood pressure, smoking cessation, depression, weight loss and nutrition. Essentially, cardiac rehab is a program that transforms lives.”

Heck began his 12-week regimen shortly after his release from the hospital. And although as expected, he has spent a great deal of time on the exercise machines, he has found the most value in the educational components of the program.

“They (therapists) spent a great deal of time with us talking about eating well — things like using less salt and sugar. I found that very, very helpful,” he says. “The other aspect I found extremely beneficial was a session with the pharmacist who spent time with me, going over the medications prescribed, their purpose, and emphasizing the importance of taking them as prescribed.”

Halfway through his regimen, Heck has found that the cardiac rehab at NMC is serving him well, consistent with the rest of his experience at the hospital.

“The nurses and other staff members are always there (for patients) which is very important when you’re in the hospital,” he says. “They’re very willing to answer questions and share information. From ER to ICU to surgery, and then discharge and rehab, the care was excellent.”