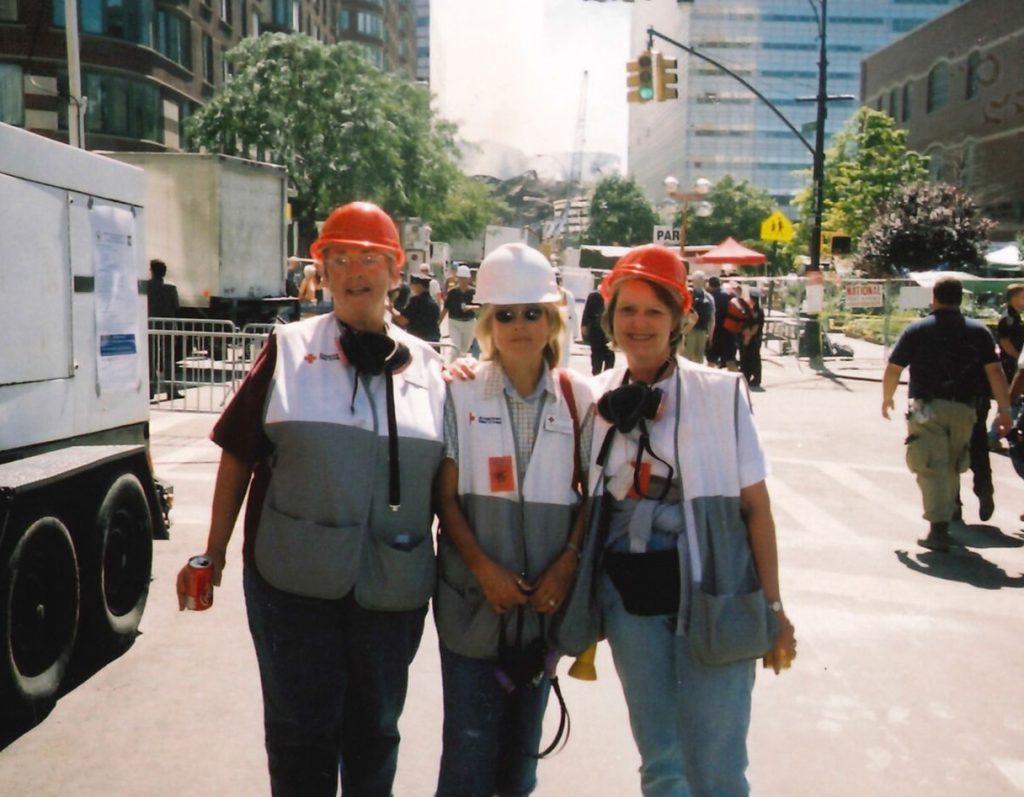 A social worker in NMC’s Generations unit, Terresia (middle) has volunteered for various agencies most of her adult life – she sees it as putting her faith into action. For the past 20 years, she has served as a Disaster Mental Health volunteer with the American Red Cross. Through this position, Terresia has traveled many places in times of need, providing emotional support and crisis intervention.

Her first local assignment was the DeBruce grain elevator explosion near Haysville, while her first out-of-state assignment was in Houston after Tropical Storm Allison struck in June of 2001. Three months later, Terresia faced her hardest assignment to date – Ground Zero after the 9/11 terrorist attacks.

Terresia spent nine days at Ground Zero, working with emergency responders, government officials and steel workers. The majority of these people were still in the early stages of transitioning from rescue to recovery. Every year, as the anniversary passes, Terresia remembers her experience with tears in her eyes. She recalls watching as a German Shepard search-and-rescue canine was hoisted by a crane to an underground area that still needed to be searched, and she remembers the recovery workers who would stop and cover their hearts with their hands as a recovered body would pass. “Being present to witness the courage, dedication and heroic efforts made during that time absolutely humbles me beyond words,” said Terresia.

See your options for covid-19 testing

NMC Health has three family medicine clinics where you can receive a COVID-19 test.

We offer on-site testing for patients and are accepting new patients now.

Schedule An
Appointment
NOT A FREE TESTING SITE NMC Health's services for COVID-19 testing are not free.
We require an evaluation of your symptoms by a medical provider in addition to the COVID-19 test.

There are free locations near you to receive COVID-19 tests.

Exciting news! NMC Health’s Sunflower Café will be getting a
refresh starting Friday, December 3. When the Sunflower Café reopens, you will
see new flooring, new surfaces on the service lines, freshly painted walls, and
some changes to the layout.

How does this impact me?

During the renovation, there will be no disruptions to
regular patient room service or Meals on Wheels protocols. The regular
cafeteria space will be closed (see image below). Because of this, you will see
the following temporary changes:

On Monday, December 20, we plan to return to normal Sunflower Café services. There will be one permanent change.